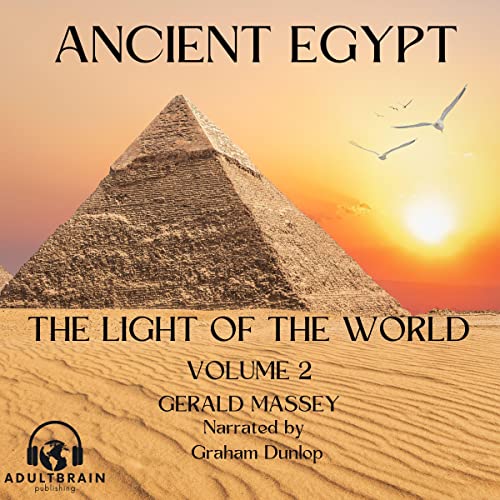 Ancient Egypt – The Light of the World, Volume 2 – Gerald Massey

No one ever understood the mythology and Ritual of Ancient Egypt so well as Gerald Massey since the time of the Ancient Philosophers of Egypt. This book is one of the best when it comes down to Egyptian mythology, occultism, and interpretation. It’s a standard work no one wants to miss.

Gerald Massey (29 May 1828 – 29 October 1907) was an English poet and self-educated Egyptologist. He was born near Tring, Hertfordshire in England. He was attracted by the movement known as Christian Socialism, into which he threw himself with whole-hearted vigor, and so became associated with Frederick Denison Maurice and Charles Kingsley. He became interested in Egyptology and the similarities that exist between ancient Egyptian mythology and the Gospel stories. He studied the extensive Egyptian records housed in the British Museum, and eventually taught himself to decipher the hieroglyphics. Massey’s first public appearance as a writer was in connection with a journal called the Spirit of Freedom, of which he became editor.  He also published works dealing with Spiritualism, the study of Shakespeare’s sonnets, and theological speculation.

IX. THE ARK, THE DELUGE, AND THE WORLD’S GREAT YEAR

X. THE EXODUS FROM EGYPT AND THE DESERT OF AMENTA

XI. EGYPTIAN WISDOM IN THE REVELATION OF JOHN THE DIVINE

XII THE JESUS-LEGEND TRACED IN EGYPT FOR TEN THOUSAND YEARS

Double Horus, or Jesus and the Christ

The Mysteries and Miracles

Jesus in the Mount

Sut and Horus as Historic Characters in the Canonical Gospels

The Group in Bethany

The Founders of the Kingdom

The Last Supper, the Crucifixion and the Resurrection . .

The Sayings of Jesus