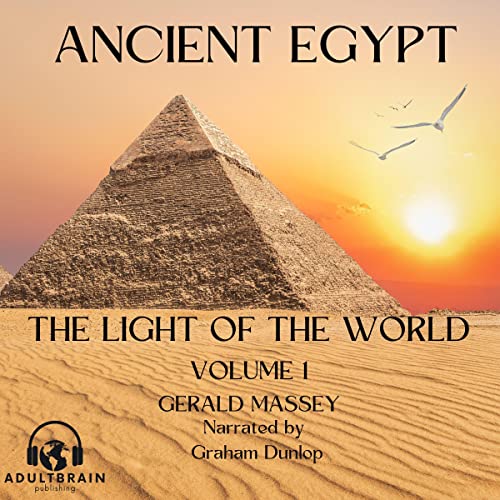 Ancient Egypt – The Light of the World Volume I, Gerald Massey

In audio, on Audible and everywhere else! The best deal for all 8 books inside (33 hours total)

I. SIGN-LANGUAGE AND MYTHOLOGY AS PRIMITIVE MODES OF REPRESENTATION .

II. TOTEMISM, TATTOO AND FETISHISM AS FORMS OF SIGN-LANGUAGE

III. ELEMENTAL AND ANCESTRAL SPIRITS, OR THE GODS AND THE GLORIFIED

IV. EGYPTIAN BOOK OF THE DEAD AND THE MYSTERIES OF AMENTA .

V. THE SIGN-LANGUAGE OF ASTRONOMICAL MYTHOLOGY.

VIII. THE EGYPTIAN WISDOM IN OTHER JEWISH WRITINGS

No one ever understood the mythology and ritual of Ancient Egypt so well as Gerald Massey since the time of the Ancient Philosophers of Egypt. This book is one of the best when it comes down to Egyptian mythology, occultism, and interpretation. It’s a standard work no one wants to miss.

Gerald Massey (29 May 1828 – 29 October 1907) was an English poet and self-educated Egyptologist. He was born near Tring, Hertfordshire in England. He was attracted by the movement known as Christian Socialism, into which he threw himself with whole-hearted vigour, and so became associated with Frederick Denison Maurice and Charles Kingsley. He became interested in Egyptology and the similarities that exist between ancient Egyptian mythology and the Gospel stories. He studied the extensive Egyptian records housed in the British Museum, and eventually taught himself to decipher the hieroglyphics.

Massey’s first public appearance as a writer was in connection with a journal called the Spirit of Freedom, of which he became editor. When he was only 22 he published his first volume of poems, Voices of Freedom and Lyrics of Love. These he followed in rapid succession with The Ballad of Babe Christabel (1854), War Waits (1855), Havelock’s March (1860), and A Tale of Eternity (1869). He also published works dealing with spiritualism, the study of Shakespeare’s sonnets, and theological speculation.

It is generally understood that he was the original of George Eliot’s Felix Holt. Massey’s poetry has a certain rough and vigorous element of sincerity and strength which easily accounts for its popularity at the time of its production. He treated the theme of Sir Richard Grenville before Tennyson thought of using it, with much force and vitality. Indeed, Tennyson’s own praise of Massey’s work is still its best eulogy, as he found in him “a poet of fine lyrical impulse, and of a rich half-Oriental imagination”.

It may have been a Million years ago

That Light was kindled in the Old Dark Land

With which the illumined Scrolls are all aglow,

That Egypt gave us with her mummied hand:

This was the secret of that subtle smile

Inscrutable upon the Sphinx’s face,

Now told from sea to sea, from isle to isle;

The revelation of the Old Dark Race;

Theirs was the wisdom of the Bee and Bird,

Hers was the primal message of the skies:

The Heavens are telling nightly of her glory,

And for all time Earth echoes her great story.